Since adopting the modified strip-till system in 2008, Dean Sponheim has seen a 12-15% increase in corn yield and an $80-$100 per acre increase in net income.

Pictured Above: PRODUCTIVE PLOTS. Nearly 10 years ago, Nora Springs, Iowa, farmer Dean Sponheim incorporated a strategy called strip-cropping into his strip-till system. The method alternates 8 rows of strip-tilled soybeans with 8 rows of strip-tilled corn on his 600-acre farm. Plots vary in size from 80 to 160 acres and sometimes plots will include alternative 4-row blocks of each crop. Key benefit of the system include better light interception, air movement in the strips and less soil erosion.

Nora Springs, Iowa farmer Dean Sponheim calls himself an “accidental conservationist,” because he stumbled into strip-tillage by necessity and economics, rather than for reasons of environmental friendliness.

“I have to farm high clays and I was always replanting corn in the spring if we had pounding rains,” says Sponheim. “No matter how dry I worked that ground before I planted it, it would always crust over. I’d heard about farmers in Ohio and Indiana that were strip-tilling and not working the ground in the spring to keep the soil intact so they wouldn’t ruin the soil tilth in the spring.”

Having to replant 7 out of every 10 years, Sponheim had enough. In 1999, he decided to switch from full-width tillage to strip-tilling and he hasn’t looked back. While he had seen good production from conventional tillage, benefits including increased organic matter, superior planting conditions and earthworm activity have him believing that he’s on the right track.

By the early 2000s, Sponheim decreased the ratio of years he’s had to replant to 1 out of 10. “We had to move on from full tillage so we could get back to the prairie-type soils,” says Sponheim. “We’re taking care of the soil differently now, and strip-till is helping us build it back up.”

From his modest beginnings of rigging up an old anhydrous bar and some simple row units, Sponheim has since pushed to innovate and advance his strip-till system. The cornerstone of this change occurred in 2008, when he incorporated a strategy called strip-cropping.

Sponheim suggests the concept of strip-cropping has been around for nearly 50 years. Two years after a few trial runs on his farm, early results convinced him to adopt it across his entire operation. He has seen a 12-15% increase in corn yield and an $80-$100 per acre increase in net income over more traditional cropping systems.

“I’ve been told that I should be planting 50,000-plus seeds per acre for corn. I think we could gain an additional 10% yield, but only on the outside rows…” — Dean Sponheim

Sponheim says there are three primary advantages the strategy offers:

Light interception: One of the largest contributing factors to the increased corn yield, specifically in a strip-cropping system, is the plant’s access to light.

“All of our yield gains are from the two outside rows on each side of the strip,” he says. “Our inside four are basically yielding the same as our full field plantings, or what we call block planting. But there’s more sun intercepting those outside two rows so they become more efficient and productive. 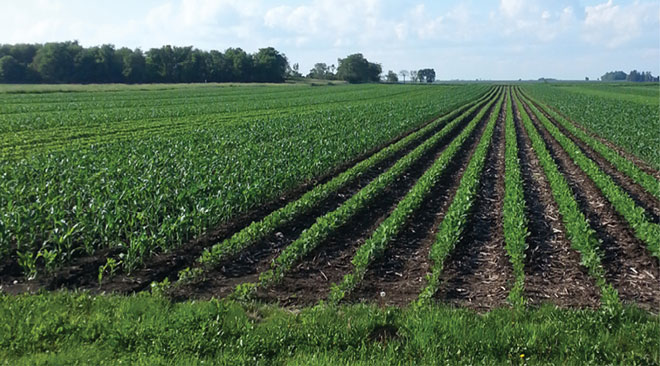 THROWING SHADE. One of the biggest contributing factors to the increased corn yield, specifically in a strip-cropping system, is the plant’s access to light. Dean Sponheim says the two outside rows of corn on each side of the corn strip see more light and are more efficient as a result.

While the corn soaks up some rays, the soybeans next to them do end up languishing in the shade. Sponheim says soybean yields can take a bit of a beating in this regard.

“We lose approximately about 3.5% on soybean yield with our 8 rows, but we see a drastic reduction on 4 rows,” he says. “The shading takes a toll on the beans and it seems like there’s nothing else we can do about it. We’ve gone down as low as 60,000 population planting. It does allow us to have more upright soybeans, but it doesn’t help us in yield.”

Planting a shorter variety of corn likely wouldn’t reduce the issue either because the outer rows of corn are already short, Sponheim added.

“The corn will grow shorter in a strip because it’s not competing as much,” he says. “The corn on the west row is actually the shortest and then it kind of makes a bell curve shape. The corn gets taller as it goes to the center and then it comes back to the east row which is shorter, but not as short as the west one. I would attribute that to sunlight as well.”

Air movement: Because air can more easily move through the alternating strips, Sponheim says they stay cooler on oppressively hot summer days, which takes stress off them.

“We see some increased yield from the air flow through the strips,” he says. “Our actual temperatures in the corn is less than what it is in the corn blocks. Corn yields rise when the corn plant starts resting at night, and I think our corn in the strips actually starts doing that quicker at night.”

One might think with a crop wind tunnel layout, Sponheim’s plots might be vulnerable to severe wind events, but he says this isn’t the case. After having survived several blustery encounters with his current system, he says the argument could almost be made that his system is less vulnerable.

“When a whole field is down, which rows are usually left standing?” he asks. “The strongest ones stay up which are the ones on the outside. They survive because they’ve been weathered and the stalks are tougher on the outside 2 rows. We had a 70-mph wind recently that tipped them, but they bounced back. We even had more green snap in the 4 center rows of the 8-row corn than we did in 4-row corn.”

Because corn and soybeans alternate, the residue left after harvest seems to complement one another. “In Iowa, we get a lot of wind during the winter, and we can get those black ditches with all the dirt being blown, but that’s from leaving a whole field of soybean stubble,” he says. 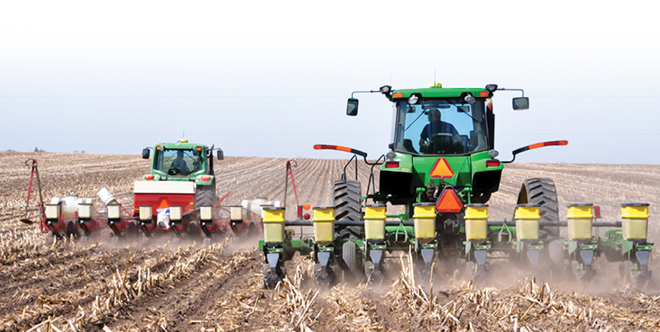 PRECISION STRIPPED. Even though Dean Sponheim builds his strips in the fall with 12-row strip-till rigs, he plants his corn and soybeans with 8-row planters — something that would be hard without sub-inch guidance corrections.

“Because we have these corn strips, it helps hold more on the field. Also, if we get a dry spell or a drought, the corn stalks often hold more snow during the winter and when everything melts in the spring, we have a bit more moisture.”

For all its benefits, Sponheim does say that the strip-cropping system takes a bit more work in the management department. The first layer of that management is matching up the work of the strip-till bar to the planter — something that became much easier with upgrades in precision equipment.

Originally, Sponheim was using a lightbar running off a WAAS signal before transitioning to RTK-guided systems for his guidance.

“We strip-tilled without auto-steer for 9 years,” Sponheim says. “Once we adopted it with RTK, it was a godsend. We use an 8-row planter, but we can be accurate enough with our two 12 row strip-till rigs that the strip-tilled fields can be planted with 12, 16, 24, 32 or even 36 row planters.”

Because Sponheim and his son also run a custom strip-tilling service, they currently operate two strip-till rigs. Their newest rig is built with an Integra bar with Niffty Ag Reaper row units and an anhydrous ammonia applicator.

Two Montag 6-ton fertilizer tanks hold phosphorus (P) and potassium (K), which can both be variable-rate applied. Their second 12-row rig is an Elk Creek 3-point mounted pull cart that carries a Fargo Air 55 tank and metering system with both a Redball bar and row units.

It also can apply anhydrous ammonia and they plan to replace the ground-driven meter with a system that will allow variable-rate P and K application.

Both strip-till units are outfitted with John Deere’s iGuide implement steering system so they can maintain sub-inch accuracy on all types of terrain. Most of their strip-till work is completed in the fall.

Their 8-row planter, an International 800 model with a Rawson hydraulic drive, is pulled by a Deere 7130 tractor, outfitted with a 2630 monitor that uses a John Deere StarFire 3000 receiver for auto-steering and seeding rate control.

“We have 12-row strip-till machines so we don’t even match up to our corn and soybean strips,” Sponheim says. “We’re basically applying the same nutrient amounts for 220-bushel corn and 65-bushel soybeans. Our ultimate goal on that is to get a Gen 2 Montag cart to put on one of my machines that has section control.

“They have electric drives on each unit, so we’re going to be able to eventually meter the amount of fertilizer we want on each row. When we do that, and we attach it to an 8-row machine, we’ll probably go to a no-till twin-row soybean planter and run twin-rows on each side of our corn.”

Sponheim also hopes to experiment with seeding populations to reach the optimal setting for every individual strip.

“I’ve been told that I should be planting 50,000-plus seeds per acre with corn,” he says. “I think maybe we could gain another 10% in yield, but I’d want to push it on the outsides of the rows.

“I just cringe at the idea of planting 50,000 on the 4 inside strips, I just don’t think it’d work well. When I started selling seed corn, I had the goal that we were going to produce 300-bushel corn, and we got that 2 years ago.