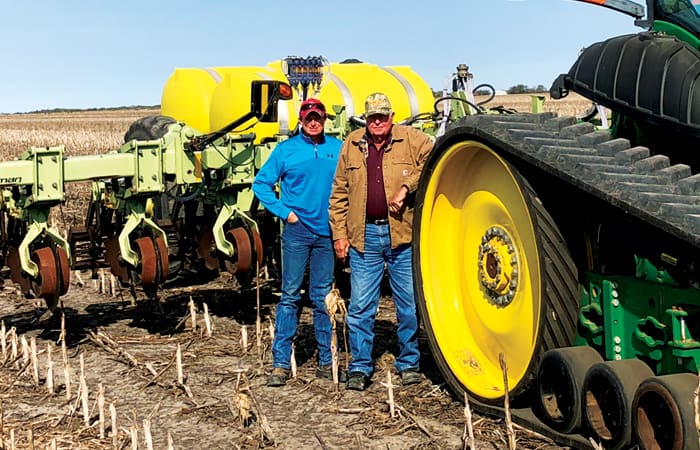 Solving Stubborn Soils in an Arid Climate with Strip-Till

Trading bedded fields for strip-till cut fuel by half and improved organic matter by 1.5% for Moench Farms near Corpus Christi, Texas.

Since beginning as a 160-acre Grade A dairy in 1926, there’s been a lot of change and adaptation made at Moench Farms near Agua Dulce in the Texas Coastal Plain west of Corpus Christi.

In fact, the word “adapt” comes up regularly in conversation with Ross Moench who joined a partnership with his father, Allen, in 1998 to farm the expanded spread that began when Ross’s great-grandparents bought the original quarter to milk cows. Today, the pair farm 1,760 acres of cotton, wheat and corn in the Nueces County area and credit strip-till with making it possible with so little labor.

“It’s been a mixed bag over the years,” Ross explains. “For a long time, we grew wheat, grain sorghum and corn and we were conventional farmers growing on bedded 38-inch rows. We kept looking for better methods to work with our variable Coastal Plain climate and average 30-inch annual rainfall that falls primarily from June to October. We finally switched to 30-inch rows and strip-till in 2008, after watching a neighbor’s success.”

The Moenchs run a 12-row Orthman 1tripR, planting 30-inch rows, which they like because it allows them to return to corn after severe aflatoxin problems and drought forced them to drop it when they were farming on beds.

“Now that we’re getting more normal rains, we’ve been able to bring cotton and corn back into our rotation, particularly with the help of AF36Prevail and Syngenta’s AflaGuard applied mid-season,” Ross says.

The Moenchs are watching the…