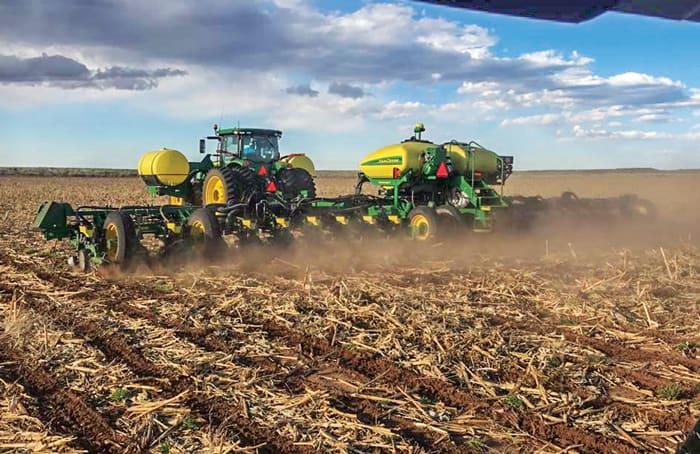 Moisture retention and fuel savings are major reasons Gruhlkey Farms in the Texas Panhandle makes extensive use of strip-till on their growing 8,000-acre irrigated operation.

In 2013, the Gruhlkey brothers of Wildorado, Texas, were all in their 20s when they kicked off their own irrigated farming operation based on the latest water-use efficiency methods available to them at the time and strip-till management they had been using on their farm since 2007.

Not 2 years later, using best management practices for sub-surface drip irrigation and highly efficient pump and nozzle designs for center pivot sprinklers, the brothers Braden, Brittan and Cameron, along with their dad, Bill, had built a 5,000-acre operation just west of Amarillo producing corn, cotton, silage and seed milo, along with winter wheat.

“Irrigation was everything back then, and at that time we had 1,000 acres of strip-tilled corn under a variety of quarter-mile and half-mile center pivot systems,” Braden recalls, noting the semi-arid acres his family farms gets only 12-18 inches of rainfall per year. “We had seen our irrigation wells go from pumping 800 gallons per minute (gpm) in my granddad’s day down to about 200 gpm as the ground water receded over time, so strip-till was the way we ensured maximizing our water to grow a good crop.”

While the family had been strip-tilling since 2007, starting out with a shop-built strip-till rig machine, and graduating to a used Orthman 1TripR, the brothers decided to launch their new “sibling operation” with a new Kuhn Krause 12-row Gladiator.

They equipped the new machine with a liquid fertilizer system for pre-plant applications, and used it, along with precision watering…