Achieving 80-plus bushel soybeans and 260-plus bushel corn isn’t an accident for Illinois strip-tiller John Potter who leverages cover crops, timely fertilizer applications and a strategic equipment mix to succeed solo on 1,250 acres.

John Potter was looking for a way to reduce labor on his west central Illinois farm when he decided to become a strip-tiller nearly 20 years ago.

“My dad had always been part of the operation, but when he retired because of his health and my son was entering a career in law enforcement my labor pool dwindled quickly,” Potter explains. “I needed to find a way to cut labor to a minimum if I was going to continue farming. Today, because of strip-tilling, it’s still pretty much me full time and my son and grandson who help when they can.”

Soil and water conservation were also a big part of the equation that led to Potter’s adoption of strip-till, a move he says saved him a lot of worry. “When I started farming, we worked the ground several times before planting. Regardless of the moisture level when we started, we were always dependent on more rain,” he recalls. “Strip-till eliminated most of that concern.”

Another plus is the firm soil in a wet fall. The deep-tilled soils don’t support heavy machinery very well, he says.

Potter grows a 50/50 rotation of corn and soybeans on 1,250 acres near Jacksonville, Ill., and for 15 years has followed his corn crop with a late-season cover crop. In 2018, corn yields averaged 265 bushels per acre and soybean yields were 83 bushels. While down slightly in 2019, yields still averaged 230 bushels for corn and 70 bushels for soybeans across the farm.

“Because we have very good soils, I can’t really point to significant yield increases because of strip-till, but our production remained strong throughout the transition and continues to improve overall,” he says, “We’ve noticed a tremendous increase in earthworm and night-crawler activity over the years, and our labor rates have remained low.”

“I started using covers after a local producer meeting emphasized the use of brassicas as a natural control for nematodes,” he explains. “I’d never had a test result showing I had a big nematode population, but seeded covers mainly as an insurance practice. I’m convinced it has helped my soils.

Potter recalls one year they were patterning tiles in two fields separated by a waterway. One side had no cover crop growing, and the other had turnips that had grown 8-10 inches. On the side with no cover crops the clods were the size of tombstones, while on the other side the soil just crumbled, Potter explains, citing visual evidence that covers help the soil structure. 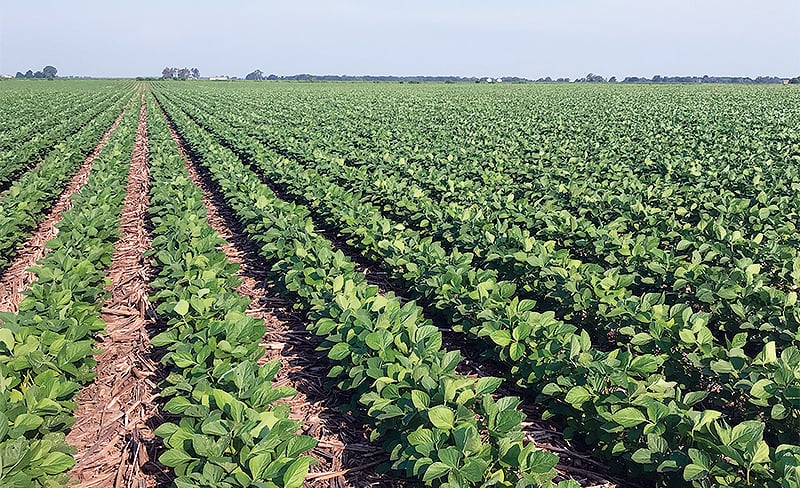 Potter says he’s also noticed consistent yields across his farm since introducing covers, even in years when neighboring fields struggled because of weather conditions.

“I use the covers on corn stalks only, and usually have them broadcast with dry fertilizer by my farm retailer or flown on within 24 hours of harvest. I want covers to have 5-6 weeks growing time to make them worthwhile,” he says.

In the beginning, Potter only seeded turnips, but now favors a 3-way mix his retailer prepares using turnips, radishes and oats. He prefers 3 pounds of turnips per acre, but reduces that amount in a mix. For oats, he’ll plant two-thirds of a bushel to a bushel per acre.

“Before corn, I like to start out with a clean bean stubble field so I can plant as early as possible,” he explains. “While we use knife rolls on the combine to size stalks, there are years when the weather cooperates I like to get in with a Great Plains Turbo-Till to do a little vertical tillage to further work the residue. I usually try to get that done within 5 days of corn harvest.”

When Potter first started strip-tilling, he ran a 12-row DMI toolbar he rented from a fertilizer retailer. It was simple — just an anhydrous applicator with markers — and Potter admits, a crude entry point into the practice,

“I seed covers on corn stalks only, and have them broadcast with dry fertilizer or flown on within 24 hours of harvest. I want covers to have 5-6 weeks growing time to make them worthwhile…” — John Potter

“I ran that for 3 years before getting a regular strip-till bar, but it did not have row cleaners or strip baskets to shape and firm the berms,” he says. “I’m now on my second Kuhn-Krause bar and have used them for 7 seasons.”

In 2018, Potter bought a 16-row Gladiator equipped with shank openers set on 30-inch rows. He also upgraded to a 400 horsepower John Deere Front-Wheel-Assist 8400R tractor, a combination he describes as “a good match.”

“The Gladiator is equipped with row cleaners and wavy-disc closers and baskets with chains,” he explains. “I strip-till about 7 inches deep regardless of soil type because I’ve found it a sweet spot. We build berms in the fall about 10 inches wide.

Potter strip-tills roughly 90% of the entire farm, but there are places on hillsides he’ll avoid because of erosion, so those areas are typically no-tilled to protect the soil.

In 2019, he bought a new 16-row, 30-inch Deere ExactEmerge planter to complement the Gladiator. It’s equipped with factory hydraulic down pressure, pneumatic residue managers, along with Yetter closing wheels.

NEW IRON. John Potter updated his 16-row Krause-Kuhn Gladiator strip-tiller with a liquid fertilizer system in 2019 to accompany its anhydrous ammonia capabilities. Going forward, Potter plans to in-furrow apply a 50/50 mix of ammonium thiosulfate and humic acid when he builds his berms.

“We strip-till our soybeans also, and 2019 was the first year we had high-speed capability,” Potter explains. “Until then, we were using a 1630 MaxEmerge equipped with mechanical row cleaners and pneumatic down pressure.”

The long-time strip-tiller says he doesn’t own a plow, but still maintains a field cultivator to “touch up” rough spots, and includes the vertical tillage tool as a handy go-to for tough residues. He operates his own 90-foot, 1,350-gallon Fast sprayer, and rounds out his machinery shed with the tractor, planter and strip-till rig.

“If I look at my records compared with other strip-tillers, I’ll usually have more dollars in equipment than most, because I like new, dependable, up-to-date machinery,” he explains.

Like the rest of Morgan County, Potter's fields have highly variable soils ranging from what he calls timber soils to heavy clay on a rolling topography.

“While my son is beginning to set up the farm on 5-acre grids, I have always farmed by soil types listed on our county maps,” Potter explains. “We are on a basic soil sampling schedule of a quarter of the farm every year so the entire operation is sampled once every 4 years. From that, and the soil types we’ve identified, we variable-rate apply lime, but we generally broadcast our dry fertilizer at the same rate across our fields,” he says.

The bulk of Potter’s nitrogen (N) needs are met with a fall anhydrous ammonia application made with the strip-tiller. He typically applies about 120 pounds per acre of actual N with anhydrous, and then follows up according to yield goals with a split application of liquid 32% N mixed with ammonium thiosulfate during spring burn down. 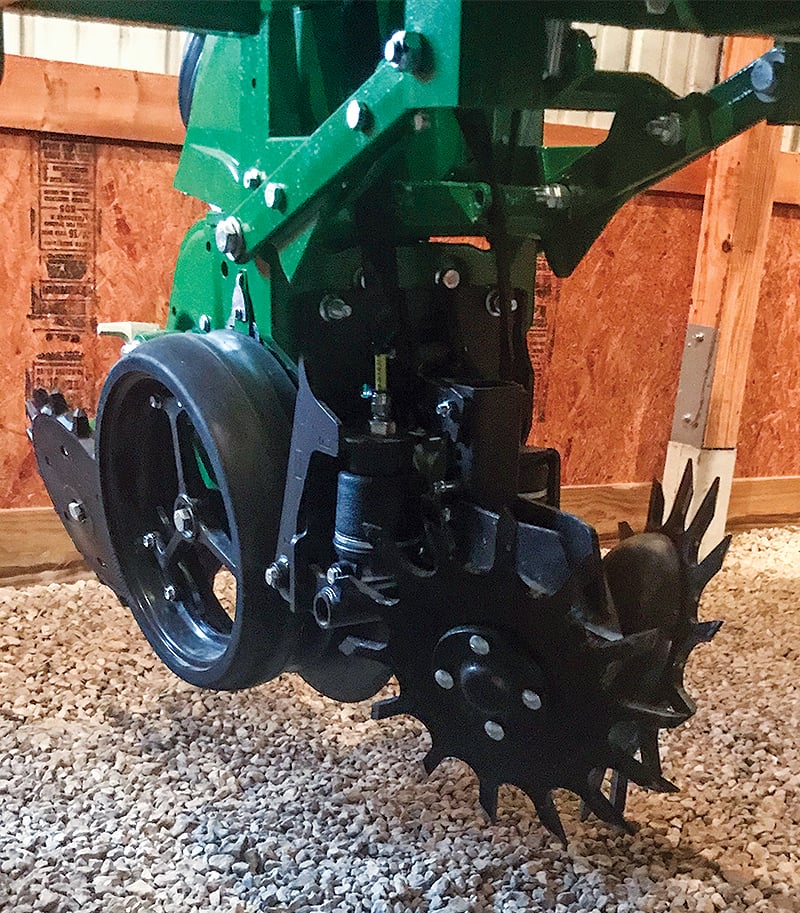 "Depending on the year or particular field, we may side dress with more 32%,” Potter says. “On our terraces, where we can’t get back in during the growing season, we may apply a little heavier anhydrous rates.”

In 2019, Potter installed a liquid system on the Gladiator and uses it to augment his anhydrous application with an in-furrow 50/50 mix of ammonium thiosulfate and humic acid at a 3-gallon per acre rate.

“We’ve tried starter fertilizers in the past, but our records indicate, on our farm at least, there was no yield advantage for us,” he explains. “Visually it seemed the crops started off better in those trials, but they showed no significant performance improvement at harvest. Again, our soils are very good and seem to take care of us.”

Potter adamantly recommends adopting a controlled traffic system to combat compaction. “We have always used traffic control as much as possible, even before GPS,” he recalls. “I remember using the strip-tiller with the marker arms and following it with the planter.

When GPS became available, Potter was one of the first users in this area. Today, all of his operation is field mapped and he uses Deere’s 4640 dual-screen RTK system for strips and planting, and a 2630 for spraying and vertical tillage, both designed for sub-inch accuracy.

Potter uses the mapping technology to strip-till and plant soybeans 6-inches off the previous corn row. “Depending upon how much residue is in the field, I may have to strip closer to the middle of the rows, but we’ll grow a bean crop,” he says. “Then we’ll plant corn in that row the following year, before moving the strip back to the original row when I strip for beans again.”

Potter is also a proponent of seed treatment and biological amendments as a hedge toward better soil health.

“We have a batch treater that is very gentle on seed and we use it on soybeans, wheat, corn and some of our cover crop blends,” he explains. “We’re continually working with various dry and liquid bio-stimulants from various companies.

Potter says he continues to experiment, but they’ve treated seeds with various fungicides depending upon the year, and used the batch treater to apply mycorrhizal fungi to some seeds in an effort to improve the beneficial fungal networks in the root zones of his crops.