In an area of the world where conventional tillage reigns, strip-tiller Glen Hodnefield isn’t intimidated by doing something different.

Hodnefield has been strip-tilling for 25 years and no-tilling for more than 30 years in the Radcliffe, Iowa, area. He’s a one-man operation who, with the help of his wife and son, farms about 1,200 acres. He strip-tills corn and no-tills soybeans in rotation, although he does have some corn-on-corn fields.

The benefits of strip-till are obvious to Hodnefield and other farmers if they drive past one of his fields at the right time. At that particular field, Hodnefield shares a pond with a neighbor who does full-row tillage.

“We’ve got a fence line between us, and until his pond overflows into my half, you can tell that mine drains,” Hodnefield says. “Improved water filtration is one of the first big benefits that I saw when I started strip-tilling 25 years ago.”

On a brisk late November morning, Hodnefield is in one of his rented fields making fall strips with his 12-row Blu-Jet strip-till bar. That day, he got started later than he would have liked — the tongue of his anhydrous tank was stuck to the frozen ground in the morning — but the soil warmed up enough to free it and start strip-tilling.

He’s been farming this 63-acre field for more than 10 years. With so much experience on this piece of land, he’s developed an efficient pattern that allows him to minimize unnecessary driving over the field and end up exactly where he started.

The pattern also reduces where his tender truck drives on the field. Hodnefield bought a used tender truck for dry fertilizer. The local coop mixes his blend and loads the truck, and then Hodnefield hauls it back to the field. 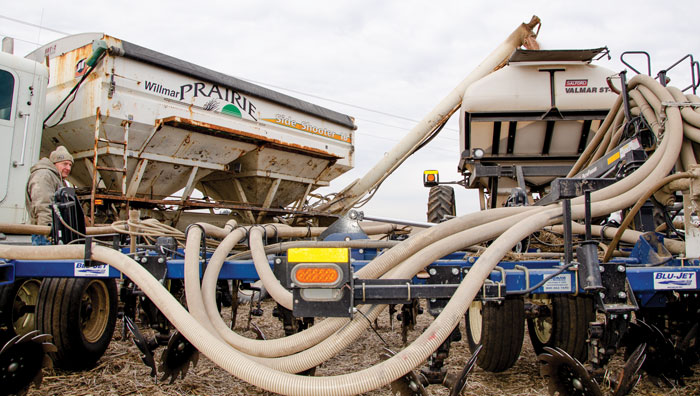 TIME TO TENDER. After a morning of fall strip-tilling, Hodnefield refills his dry fertilizer tank. He has his own tender truck to maximize his efficiency in the field and eliminate waiting on a supplier for service.

He prefers 0-60-90 dry fertilizer plus 10 pounds of sulfur in the fall. The recommended sulfur rate for his area is 20 pounds, but he’s able to cut that amount in half because he bands the fertilizer. In total, he’s applying about 280 pounds of dry product per acre. He also applies 145 pounds of anhydrous ammonia while making the fall strips and applying the dry fertilizer.

Hodnefield applies manure in one field, which allows him to do 3 years of corn before beans. He says managing strip-till with manure can be tricky, depending on how the manure is applied. Some applicators use dirt to cover the manure, causing a lot of soil disturbance. Others create a narrow slot to minimize soil disturbance. Hodnefield prefers the latter.

“Manure is something that I think can work with strip-till, but you have to be able to work with your applicator,” Hodnefield says. “There are a lot of things involved, but I think it’s very workable.”

Hodnefield used to do a lot of custom strip-till, but it’s tapered off in recent years. Part of the reason is because the local coop has gotten its own strip-till bar, and Hodnefield is OK with the change. Custom strip-tillage can be a lot of work in general, he says, because he’s trying to do his own fields and his customers’ fields in the same short window. But by making fall strips, he’s able to spread out the workload.

“I love it,” Hodnefield says. “My first pass now in this field will be with the planter, which makes me more timely planting corn.”

Planting typically starts April 20-25. Hodnefield can plant corn in 4 days or less, and then he immediately starts planting soybeans. His goal is to be done planting corn by May 1 and beans by May 10.

He runs a Kinze 1223 planter with 12 rows in back and 11 in front. He uses the 12 rear rows for corn and all of the rows to no-till soybeans in 15-inch rows. He plants the beans on an angle, but harvests and sprays them straight across the field. Hodnefield did the math and determined that he drives over fewer beans by taking this approach. The outside divider on the bean platform also tends to separate beans better during harvest, and if any beans are knocked over while harvesting, Hodnefield can pick them up on his next pass. 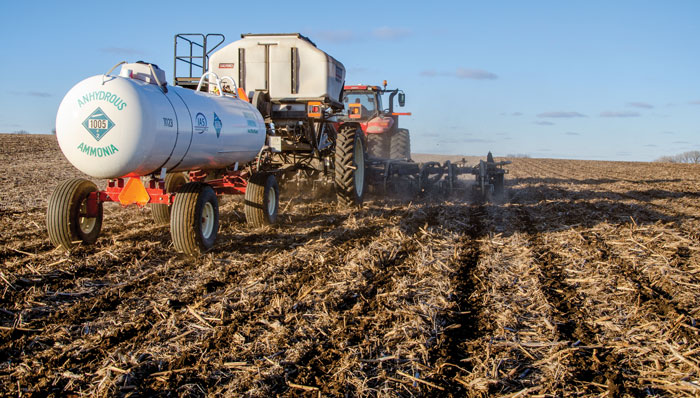 NUTRIENT PLACEMENT. Hodnefield bands dry phosphorus and potassium, along with anhydrous ammonia, in fall strips near Radcliffe, Iowa. He applies 0-60-90 dry fertilizer plus 10 pounds of sulfur.

“I’ve got the best of both worlds with strip-till on the corn and no-till on the beans,” Hodnefield says. “I’m not disturbing the soil, except for making the strips, and I get the best parts of strip-till — warmer soil, better oxygenation for the plant to start the year, targeted nutrient placement.”

Hodnefield uses a two-application process for his herbicide program. He does an early burndown on corn with 2,4-D and then comes back with a post-emergent herbicide.

“I’ve been doing 2,4-D and Roundup, but if Roundup is hard to get this year, I might just do 2,4-D along with a pre,” Hodnefield says.

For soybeans, he does a similar early burndown, sometimes even before he plants corn, followed by a post. The early application worked well in 2021, Hodnefield says, because a lot of pre-emerge herbicides take more moisture to activate.

About 10.1 million of Iowa’s 26.3 million acres use reduced tillage methods, according to the 2017 U.S. Census of Agriculture. Hodnefield isn’t sure how many farmers in his area of central Iowa are strip-tilling, and he acknowledges that it’s hard to change from a tradition of tillage. But he knows strip-till works and provides multiple benefits, despite the naysayers.

“If you want to try strip-till, find a way to do it that works for you…”

“I really think there should be more strip-till because it makes sense,” Hodnefield says. “I can see how the soil conditions and soil structure play into a whole ecosystem. When I go up and down the field, I do it with a purpose. I’m making my applications with nitrogen, phosphorus and potassium, and my next trip is with a planter.”

The time, fuel and equipment savings quickly add up. Hodnefield is invested in one piece of equipment, his strip-till bar, rather than all the equipment needed for full-width tillage. Once he got the strip-till bar set up, sitting in the cab while the tractor drove itself was just as easy as if he were tilling the field.

“Changing the mentality is really where it needs to go,” Hodnefield says. “You don’t have to do it like I do it. If you want to try strip-till, find a way to do it that works for you.” 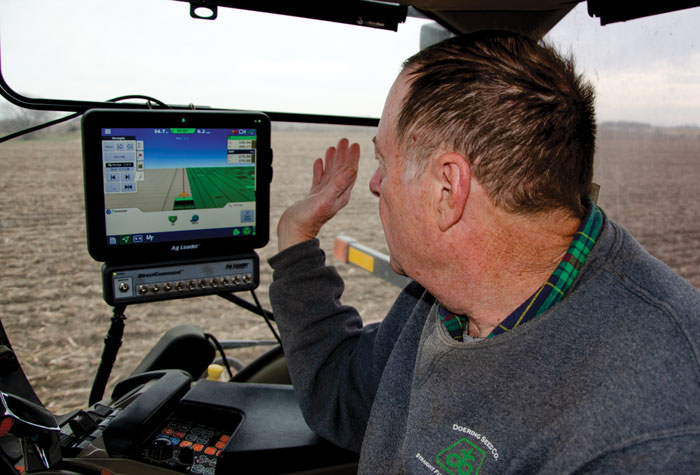 MONITORING PASSES. Hodnefield controls his equipment using an Ag Leader monitor, allowing him to operate steering and application of anhydrous and dry fertilizer all in one place.

He gives the example of an agronomist he talked to who’s working with large producers. The operations are broadcasting fertilizer and then strip-tilling without any fertilizer. The fertilizer gets mixed into the strips as they’re made, and the operations are able to strip-till 3,000-4,000 acres per year with this method.

“That would work for some of the big farmers,” Hodnefield says. “You could make a 24-row strip-till bar just to make your strips and broadcast fertilizer. You can cover a lot of acres in a day because you don’t have to stop for fertilizer and all that.”

Hiring someone like Hodnefield to do custom strip-till is another option to determine what strip-till can do for an operation.

“Some of my best customers have gotten their own rigs,” Hodnefield says with a laugh. “And I’m OK with that. Custom strip-till is a great way to try it before buying your own.”

Hodnefield often talks with other local farmers about his operation and the benefits he sees from strip-till. At one local panel event (see here), Hodnefield recalls a farmer who seemed to be asking for a reason not to strip-till, but he could tell the concept clicked with the man.

“We could answer all of his questions, and it made sense to him,” Hodnefield says. “I think people need to see the economic benefit and reason for change. I hope that I can give people a reason to think about making a change.”