In a unique approach to growing organic corn, Indiana farmer Jason Federer is relying on an alfalfa-clover cover crop for both weed control and nutrient management.

Organic crop production doesn’t often go hand-in-hand with reduced tillage because of the need to use field cultivation to get rid of weeds. But Wolcott, Ind., grower Jason Federer is integrating reduced tillage with organic methods to improve soil health and buffer the environmental impacts of his 4,000-acre operation.

A third-generation farmer, Federer says his dad tried his hand at organic production back in the 1980s.

“He was always doing something a little different, usually on the side of using less chemicals.”

That’s not what inspired Federer to tackle organic production, though.

“I wasn’t interested in organic when I was younger,” he says. “I remember when Roundup Ready came out, I thought it was the greatest thing ever. I didn’t have to cultivate anymore. I didn’t have to walk beans.”

A long-standing interest in healthy lifestyle choices and realizing the connection of human health to that of the land set into motion the changes Federer wanted to make on his farm. He felt compelled to correct the human health and environmental problems that farming contributes to on his operation.

“I look at what we’ve done to the Gulf of Mexico and honeybee populations, for example,” he says. “I don’t pin every bit of climate change on agriculture. But to try to deny the pollution side of it is pretty foolish. So, I’m trying to find a more responsible way to do what we’re doing.”

Federer began tinkering with organic practices about 10 years ago. Currently, about one-third of his acres are certified organic; the remaining two-thirds will be certified as of harvest 2022. But he’s also trying to reduce the amount of tillage involved in raising organic crops, as mechanical soil disturbance is detrimental to soil health.

Covers in the Rotation

While Federer has been growing cover crops for many years, they have more recently become a major part of his approach to reducing tillage. For example, whenever possible, he no-tills soybeans into cereal rye, which he roller-crimps to terminate if possible.

“I’m planting Aroostok. I like the variety, but it doesn’t crimp the best,” he says. “It’s an earlier variety, and I’m okay with not getting all of it crimped. But one thing we’ve been working on is our rotation, and with the crops we’re planting now, cereal rye can become a weed, just like anything else. If I weren’t planting a lot of cereals, it’d be no big deal. But I am, and I can’t have rye in everything we grow, so we’re being more careful with how we’re using it, where we’re using it and how we’re terminating it. We haven’t figured it out completely by any means, but it’s something we’re working on.”

While rotation is a major focus, Federer says he’s still figuring out what works best for him. 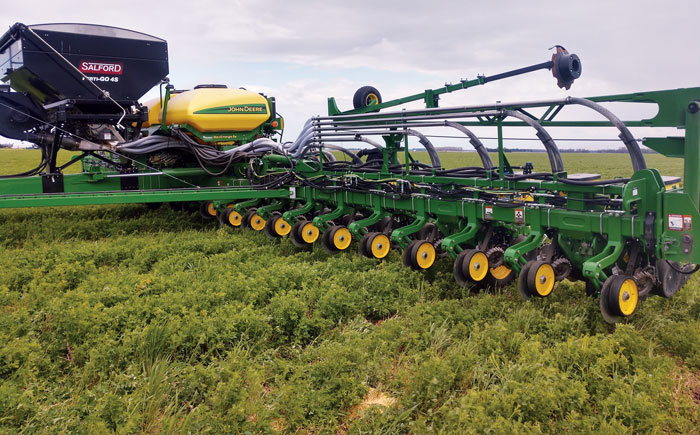 “I don’t have one rotation. It’s changing all the time,” Federer says. “It all depends on what works with the agronomics, the workflow and the economics as well. It’s awful hard to try to grow something you can’t sell or be profitable at.”

Getting Creative with Corn

Always seeking improvement, Federer experiments with everything from timing to seeding rates to termination methods. An experiment with intereseeding led to a promising practice he calls modified organic strip-till. In the past, when transitioning from alfalfa to corn, Federer would use a speed disc to do broadcast tillage across an entire field. After planting corn, he then intereseeded a cover crop.

“But that didn’t really make sense,” he says. “Why was I tearing the alfalfa out just to plant something else?”

So, in 2021, he took a different approach. He began by using a flail mower to shred the above-ground alfalfa biomass. This brought the alfalfa, which had been about 2 feet tall or taller, down to about 3 inches.

“A flail mower makes any kind of tillage pass afterwards work so much better,” Federer says.

After mowing the alfalfa, he used a Hiniker cultivator to undercut strips in 30-inch rows where he was going to plant. The cultivator features 19-inch shares, which are V-shaped knives that cut the alfalfa roots about 1-inch deep, leaving about 9 inches of untouched alfalfa between the rows.

“It’s not a clearly defined line, seeing as it’s established alfalfa,” he says. “When the alfalfa bounced back, it was about a 50/50 split. But I don’t know that the width of the strips is really crucial. I think you could use about anything within reason and still leave that strip in the middle.”

Because the cultivator normally cuts between the rows instead of on the rows, Federer drove his tractor offset.

“Next year I’m going to actually set up a bar for strip-till where it’s on the rows, because it wants to torque on the tractor pulling off-center, and I don’t like planting in tire tracks.”

Building Soil with a ‘Land Sabbath’

Every year Federer takes a portion of his acres — about one-seventh on average — out of production for what he calls a “Land Sabbath,” or soil-building year. He plants it with a clover or alfalfa mix cover crop in preparation for the following year when it will be planted to corn.

“It works really well for us,” Federer says. “There are some fields where I haven’t done it and the corn is okay. But it’s pretty tough to beat having that legume ahead of corn.”

Federer’s primary go-to fertilizer is layer manure, but the cover crop provides all of the nutrient needs for the corn crop following the soil-building year.

“I don’t apply any manure for my corn crop, which is really important now that inputs have gone up so much,” he says. “I don’t keep track of conventional inputs now because I’m not using them, but manure prices have skyrocketed. Compared to what I was paying 2 years ago, the price has at least tripled.”

In addition, the soil-building year reduces stress in his workflow.

“We’ve got to mow it, but it’s that many fewer acres that we’ve got to hit at those crucial times.”

He followed the Hiniker with a Lemken compact speed disc running shallow to smooth out the strips. The disc hits everything — both the strips and the remaining alfalfa — but seeing as he runs it only about 1 inch deep and at an angle, “it just levels everything down and firms it up,” Federer says.

“I’d put that seedbed up against a field cultivator or anything else out there. I don’t want to go backward in my seedbed just because I’m doing strips or organic,” he says.

With the seedbed preparation completed, Federer is able to start planting later that day. The entire process from standing legume to planted corn field all happens within a 12-24 hour timeframe with the mower being the machine that really has to keep moving. A popular method when planting organic crops is to wait a week or two after tillage to allow the first flush of weeds to pass through the system, but Federer prefers to plant immediately after termination.

“I don’t like seeing the field bare and idle,” he says. “I want that cover crop to continue working for me right up until it’s the next crop’s turn.”

Though it may sound like a lot of work, Federer says he can get all his corn acres prepped and planted in about 5 days using this method.

“With my diverse rotation, I’m not planting half my acres in corn and half in soybeans,” he says. “In any given year, my corn acres are probably only going to be a quarter of my total farm acres. And with a 60-foot wide planter, 1,000 acres is not hard to get knocked out.”

After planting, Federer says follow-up operations depend heavily on the weather. 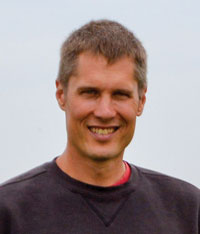 “I’ve done corn before where I hit it with a cultivator one time when it was knee-high or above, and I wouldn’t have even necessarily had to do that because it was pretty clean. I’m not going to say spotless — there were a couple of weeds out there — but overall, it was really good.

“That’s another thing I like about the alfalfa and clover — they help with weed pressure, in addition to being the fertility source,” he says, adding that if the area gets a lot of rain, he usually ends up having to run a cultivator a few times throughout the season to combat weeds.

Federer says the strips of alfalfa between the corn may get cultivated out later in the season, depending upon growing conditions. Even if he does cultivate the middle eventually, he likes to keep the alfalfa growing as long as possible between the rows to keep the ground covered and suppress weeds.

Federer’s popcorn fields under this system have yielded well thus far. In 2020, he says his 4,600-pound per acre average was higher than the average yield for the same hybrid grown conventionally.

Federer is toying with another idea for the 2022 growing season. He’s planning to try to keep the cover crop strips growing and then plant sunflowers the year after corn.

“Sunflowers don’t need a lot of nitrogen. They need a little, but not too much. So, I’m hoping to get another crop’s fertility from that year-and-a-half of alfalfa or clover.”