Illinois farmer Rock Katschnig enjoys a variety of benefits from strip-till, including flexibility in an expensive fertilizer market and better planting conditions year after year.

In the 9 years since Illinois farmer Rock Katschnig first started strip-tilling, he’s seen improvements and benefits in every area of his operation — from yield increases to healthier soil to valuable time savings.

Katschnig and his son-in-law, Rob DeFauw, strip-till about 3,500 acres in northwestern Illinois. Katschnig says it’s about a 60-40 split of corn and soybeans with his irrigated acres planted as continuous corn. They prefer to strip-till all the acres, but if the weather doesn’t allow them to get to all of the fields in time, they’ll spread fertilizer on top and do a light vertical tillage pass to incorporate it into the soil. Katschnig says they may also make a vertical tillage pass in the fall prior to strip-tilling if they grow a very tall, leafy corn hybrid.

“We have a lot of marginal soil and highly erodible sand,” Katschnig says. “We found that we can leave so much more residue and keep that sand cooler by planting between the previous year’s corn stalks.”

Strip-till solved years of stratification issues on Katschnig’s land. He had been using vertical tillage to work in potash and phosphate, but the fertility wasn’t getting into the root zone.

“We threw what we thought were adequate levels of fertility on our soils, but we weren’t getting to where we wanted to be,” Katschnig says. “With strip-tillage, we can place the seeds exactly on top of the fertility.”

The readily available nutrients led to yield increases of 10-20%, depending on the field’s soil type. Katschnig has cut dry product by a third without taking a yield hit, a substantial savings with current fertilizer prices.

IRRIGATION: About one-third of acres

“Now we’ve got a crop there,” Katschnig says. “In fact, we’ve got just as good of a crop there as we do in the middle of the field. We plant into the most beautiful seedbed you could ask for.”

Strip-till’s benefits over conventional tillage continue for Katschnig. He says the fuel savings on his high-horsepower tractor and the labor savings are phenomenal, estimating he uses only about half the diesel fuel he used to burn with conventional tillage. He and DeFauw have eliminated the need to spend days working the ground ahead of planting. Instead, someone can start spraying right behind the planter.

READY TO RELOAD. Strip-tilling stops momentarily for a refill of dry product into the 9-ton tank mounted on the strip-till bar. Katschnig says using a corn auger to refill might be a little “hillbilly,” but buying 3-4 augers was more affordable than purchasing a tender.

“Yes, you have to be dedicated and set up to ideally get your fall strip-tilling done on your heavy ground,” Katschnig says, “but it certainly pays with all the trips you save and the seedbed you gained. One of the greatest parts of strip-till is that good uniform, mellow seedbed.”

Leaving two-thirds of the fields covered with residue has improved the overall soil profile. Microbial activity has increased, and Katschnig finds a remarkable number of earthworms when he digs into the root zone of the germinating seed. The residue from the previous year’s crop and cover crops also keep the soil cooler and hold in moisture, alleviating the dryness concern of many farmers in northwestern Illinois.

Strip-till’s many benefits didn’t become apparent immediately. Neighbors with strip-till experience told Katschnig that it would take some time for compaction zones to break up, fertility to reach desired levels and Katschnig to figure out the right management. They were right, Katschnig says, estimating that it took about 3 years for everything to come together.

“I have to give credit to my friends and neighbors, who have been strip-tilling long before me, for spending hours on the phone answering my questions,” Katschnig says. “They were a great help.”

A major equipment change helped Katschnig solve some of his early issues. He started out with a 375-horsepower tractor with 8 tires pulling a 16-row bar with shanks set 8 inches deep. The setup resulted in wheel hop from the tractor pulling so hard, and the tires made it difficult to hold a straight line.

Katschnig traded up to a 600-horsepower CAT Challenger MT875C tractor with tracks the following year. Higher horsepower, RTK guidance and backing up the shank to 7 inches all have resulted in a straighter row and better root development.

“We plant into the most beautiful seedbed you could ask for…”

“The nice part about it is that tractor isn’t required to do any tillage,” Katschnig says. “We have another track tractor if there is a little bit of tillage necessary to smooth up end rows. We keep the hours low on the big tractor, so it’s going to last me a long time.”

DeFauw does the strip-tilling using a 16-row Kuhn Krause Gladiator 1205 strip-till bar with a 9-ton Montag dry tank, also an upgrade from a 6-ton tank on an identical bar that they started out using for the first 4-5 seasons. Katschnig brings extra anhydrous tanks to the fields, which can be anywhere from 2 to 13 miles away. It takes some time to do safely, but he’s usually back in the field with a fresh set of tanks before the ones behind the strip-till bar are empty.

DeFauw uses a John Deere 2630 monitor for RTK. While it doesn’t have the most up-to-date satellite technology, they’re satisfied with the system’s accuracy in staying on the strip.

“It’s a really great setup,” Katschnig says. “We end up with a tilled zone 8-10 inches wide, and that black tilled zone warms up so much quicker in the spring than if you had residue across the whole seedbed. There’s just such uniformity in planting into that strip.”

Katschnig noticed a stark difference between planting into a strip and planting into land that had nutrients broadcast over the top with an unintentional side-by-side comparison in 2020. That spring, Katschnig couldn’t get his strip-till bar across a concrete bridge to strip-till a 9-acre field. He ended up hiring a custom applicator to apply liquid nitrogen and fertilizer on top, and then he worked in the nutrients with vertical tillage. When it came time to harvest, the 9 acres produced 30-35 fewer bushels per acre compared to a nearby 20-acre field that Katschnig strip-tilled.

“It was the most drastic comparison I’d ever seen,” Katschnig says. “Anthony and William Montag came out to take pictures.”

Katschnig and DeFauw build strips in the spring and fall, depending on the weather and the soil types.

They apply anhydrous ammonia on the sandier and coarser soils using a tank pulled behind the strip-till bar. The previous year’s soybean ground gets 180 units, plus an additional 50 units of 32% liquid sidedressed later.

“We would prefer to put the anhydrous ammonia on in the spring,” Katschnig says, “but with the crazy prices we are battling right now, our supplier locked in our product last summer, and we needed to get it on last fall.” 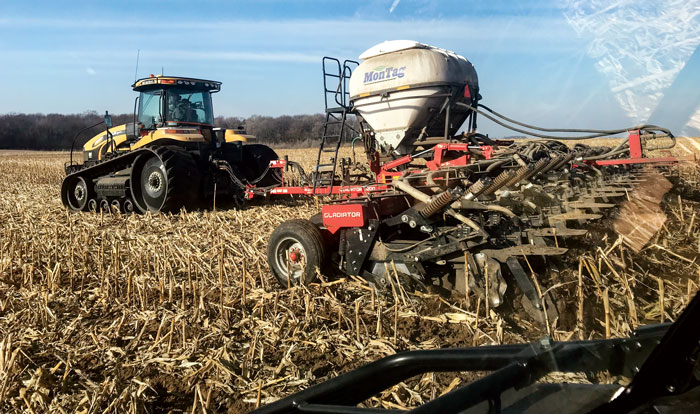 RUNNING THE RIG. DeFauw makes strips on the previous year’s corn ground using a Kuhn Krause Gladiator strip-till bar with a Montag dry fertilizer tank. They upgraded to this 600-horsepower CAT Challenger tractor with tracks after their lower-horsepower tractor had trouble pulling the strip-till bar and staying straight on the strips.

That resulted in strip-tilling about 97% of their corn ground and about 90% of soybean ground last fall. In a year without high fertilizer prices, when the berms are being built depends on the weather.

“If the field conditions are conducive, we roll,” Katschnig says. “If it’s too wet and we plug, it just means we have to get it done in the spring.”

Before the skyrocketing fertilizer prices, Katschnig would apply 100 pounds of potash, 50 pounds of monoammonium phosphate (MAP) and 15 pounds of sulfur in the strip. Now, he’s applying 125 pounds of straight potash, eliminating the currently expensive phosphate from his formula.

“We felt we were safe doing this because we’ve built up our fertility levels for years on land that I own and land that I rent,” Katschnig says. “We don’t think that we are facing a problem with depleting fertility.”

Katschnig says he’ll analyze fertilizer prices in the fall and make decisions at that time about what they’ll use for next season’s fertilizer mix. His fertilizer supplier grid tests the soil every 3 years, and Katschnig variable rates the seed in accordance with fertility levels, soil types and yield history in each field. His seeding rate for corn on very poor lighter soils is 28,000-30,000, while the rate on more productive soils is 36,000-38,000. Soybeans are seeded at 130,000-140,000 seeds per acre in 30-inch rows.

Wind erosion is one of Katschnig’s biggest enemies, so he’s replaced soybeans with cover crops on his highly erodible land. While growth is somewhat limited due to the climate, he’s successfully raised cereal rye on marginal sands. They broadcast the rye as early as possible — typically in September after shorter-maturity soybeans — and start it growing with irrigation if needed. He uses about a bushel per acre of rye, but he thinks they can counter the effects of wind erosion with a half bushel per acre. The rye is terminated in the spring with Roundup or Liberty before planting.

“We’ve had really good luck with cover crops on poor soil,” Katschnig says. “When we do go in there to strip-till, wind erosion isn’t such a concern. It also helps stabilize rain and let it soak into the soil, rather than running off.”

Katschnig wonders why more farmers in his area aren’t strip-tilling as a number of fertilizer companies in the area offer the service. However, he recognizes the timeliness and equipment investment needed to make strip-till successful.

He predicts more farmers will start strip-tilling in the future, and he knows it’s already becoming more popular this year due to high fertilizer prices, based on conversations he’s had with his contacts at Kuhn Krause and Montag.

“It’s a more time-consuming process in terms of how many acres you can cover in a day when you’re putting on dry and nitrogen in the same pass, but it certainly pays off in the spring,” Katschnig says. “And when you can cut your fertility rate by a third and still maintain the same yields, if not better yields, you have a much quicker payoff when fertilizer prices skyrocket like they have.” Widen Your Window with Fall Strip-Till