Charles Martin and Andrew Bowman have their eyes on the future of agriculture while also dealing with the realities of farming in central Illinois.

Martin is a retired assistant researcher from New Mexico State University with a master’s degree in agricultural development. Bowman is a practiced strip-tiller who grows popcorn and is working on developing a market for his product.

Something of an agricultural odd couple, they’ve paired up as collaborators on a trial Martin is conducting with a grant he received from Sustainable Agriculture Research and Education (SARE). While Martin’s project — interseeding a cash crop into a strip-tilled multi-species perennial cover crop — has yet to produce meaningful results, Bowman says his time working the fields has given him insights on how to take the positive innovations and run with them.

“I honestly think we’re on to something really, really good here,” Bowman says. “What Charles set up created the best, most beautiful strip-till berms I’ve ever seen. The soil was crumbly. It was gorgeous.”

According to the University of Kentucky, Kura clover is a high-quality perennial legume with a spreading, prostrate growth habit. It looks a lot like white clover, but it spreads by way of underground rhizomes instead of aboveground stolons. Martin had read that Kura clover was especially good for weed control and identified it as a potential component of a perennial cover that would maintain green growth on the soil as close to year-round as possible.

In 2018, Martin set out to figure out whether Kura clover could live up to its potential. He started out by seeding a cover crop mix that would winter-kill to prepare for the following spring.

When planting season arrived, he set out to seed 20 pounds of Kura clover along with a species-specific inoculum. He also added a four-species blend of mycorrhizae, and adhered the treatments using water, organic molasses and a compost tea from a Johnson-Su bioreactor. After being delayed by a wet first week of spring, Martin drilled the clover along with 50 pounds of oats as a nurse crop on May 16 with a Vermeer 15-foot 4-hopper no-till drill owned by a neighbor, pulling it with his own 55-horsepower 1974 Allis-Chalmers 180. That’s where he encountered his first obstacle.

“It’s a small-seeded plant,” he says. “I tried to no-till drill it into a winter-killed cover crop, and it just did not work. It came up very spotty.”

Making matters worse, the unusually rainy 2019 Illinois growing season meant much of the Kura drowned, preventing the planting of any sweet corn, the target crop for the experiment. Mowing throughout the summer generated residue from the oats, but that, too, was unevenly distributed. As a result, some of the Kura stands that did grow were smothered.

“I really like dandelion because it’s got a deep root to break up the subsoil,” he says. “It’s a great perennial.”

“Soil conditions at the time of strip-tilling were ideal, leaving seedbed strips with good soil moisture and crumb,” Martin says. “The emerged Kura mix did result in some heavy clodding and clumping due to the root systems of the clovers. A tine harrow could have smoothed out the clods and the soil surface, but I didn’t have access to one.”

Three days after the stripping, he planted Ambrosia, Trinity and Serendipity untreated sweet corn. However, volunteer balansa clover erupted, competing with both the corn and the Kura clover.

On May 22, Martin tested a prototype inter-row crimper unit as a control measure. However, it was incompatible with the strip-till row spacing. Mechanical adjustments and weather kept him out of the fields until June 4, when he returned with the crimper. The results were not promising. Martin ended up using a push mower to get in between the rows of corn in both plots.

In the end, the sweet corn stand was sparse and inadequate. What corn did emerge was comparable to normal on the Brix scale in both the ear and leaf, but about 2 inches shorter than the sweet corn grown on a neighboring farm.

The results of Martin’s approach weren’t ideal, and he says they’re still working out the system.

However, when Bowman saw the strips created in the 2020 plot, he was smitten. He thinks only slight modifications are needed to help the system become successful.

“I know what I’m going to do different,” he says.

“We should have waited another month and let that get super tall,” he says. “We need to wait as long as we can stand to wait to build a lot of biomass before we flail.” 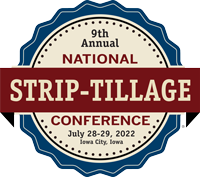 Have Questions about Strip-Tilling into a Living Mulch?

Join Charles Martin and Andrew Bowman at the 2022 National Strip-Tillage Conference in Iowa City, Iowa, on Friday, July 29, to hear from them in person about their research trials with strip-tilling into a perennial living mulch. They’ll talk in-depth about the equipment, planting methods, fertilizer program, results, application strategies and more — plus they’ll take your questions. Register online at striptillconference.com.

In addition, he thinks the three steps of chopping, stripping and planting should be done as close together as possible.

“You probably need to plant directly into the strip when it’s nice and perfect,” he says. “I think this system can work really well if you do it all in very short order.”

Nor did the trial go unnoticed. A newspaper article led to a phone call from a researcher at The Land Institute, which is looking into perennial living mulch systems.

“We’ve been in communication ever since,” Martin says. “Andrew and I are cooperating with him on another type of perennial living mulch system.”

The possible additional research and fine-tuned approach are small steps toward a larger goal, Bowman and Martin say. However, both the cash crops — in this case, sweet corn — and the cover crops will likely have to be changed to accomplish their goals, they acknowledge.

But their experiments will continue, as a successful polyculture could have huge ramifications for crop management, organic carbon sequestration and
other elements.

“I know the rewards are going to be really good,” Bowman says. “I’m not giving up on it, but I am extending my time frame to figure it out.”