Although reducing tillage intensity can provide conservation benefits and cost savings, adoption of no-till and minimum till practices for corn production has been limited in some areas, particularly in the northern Corn Belt. In this environment, a shorter growing season and cold, poorly drained soils can lead to delayed planting, low and uneven emergence and lower yields for reduced versus conventional tillage. Strip-till has been proposed as an alternative minimum tillage system for areas and soils that are not well suited for no-till management. 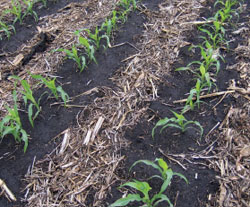 Strip-till is a method of seedbed preparation in which confined strips of soil are tilled prior to planting. Seeds are then planted directly into the tilled strips, leaving interrow areas protected by residue while avoiding residue contact with the seeds and seedling plants. Interest in strip-till has increased in recent years due to evidence that it combines many of the best aspects of no-till and conventional tillage systems.

Benefits Over No-Till: Tilling in the row area encourages more favorable soil temperature, moisture and aeration conditions for germinating seeds and seedling plants, which can translate to improved crop establishment and early season performance. In addition to potential seedbed preparation advantages, strip-till also offers the opportunity to place fertilizers directly in the root zone, away from crop residues that could otherwise intercept or immobilize nutrients.

Strip-till is a general term used to describe a group of related tillage systems that share common practices and equipment but have different names and specific management elements that vary by state or region. The 4 most commonly used forms of strip-till are: fall strip-till; spring strip-till; zone-till; and in-row subsoiling.

Fall strip-till is the most commonly practiced strip-till system and is implemented by preparing 6- to 10-inch wide and 6- to 8-inch deep strips in the fall and planting directly into these without further tillage in the spring. As in most other strip-till systems, injection knives that are able to accommodate application of both anhydrous ammonia as well as dry (P and K) fertilizers can be used to prepare strips and make preplant fertilizer applications with a single field pass.

Zone-till is similar to other strip-till methods in terms of management objectives but uses less aggressive equipment. In a typical zone-till system, planting bands are created by coulters that disturb the soil to a depth of only 1 to 2 inches. In soils where subsurface compaction is not a problem, zone-till can deliver the same advantages as conventional strip-till with lower horsepower requirements.

In-row subsoil tillage is often used in soils where subsurface compaction is a concern. In-row subsoil tillage consists of a series of straight leg shanks that disturb narrow soil zones but can be adjusted to operate to a depth of 20 inches or more. In-row subsurface tillage is used to alleviate compaction layers in the area where the seed will be placed and is often used in conjunction with zone-till equipment to create a planting band that is equally as wide as that produced in other strip-till systems.

Typical equipment requirements for strip-till include a heavy tool bar to which row markers, opening coulters, knives and covering disks are attached. Rolling harrow baskets and other seedbed conditioner attachments are often added to the back of the unit as well.

Zone-till units differ from those used for conventional strip-till in that they consist of a set of 2 or 3 offset, wavy or fluted coulters that disturb the soil surface only. In cases where subsurface compaction prevents the use of zone-till, in-row subsurface tillage units (referred to as “zone builders”) can be used in place of or in conjunction with zone-till equipment to achieve a restricted tillage band.

In order to maximize fertilizer efficiency gains in strip-till systems, N, P and K are best applied at the time of strip preparation. If strips are prepared in the spring and anhydrous ammonia is used as a source of N, application should occur at least 2 weeks before planting and at full tillage depth (6 to 8 inches) to prevent ammonia toxicity. Other fertilizer considerations for strip-till include:

The advantages of strip-till are generally most pronounced for corn following corn, where strip-till can help improve seedbed uniformity and reduce plant-to-plant variability compared to no-till. In a 4-year continuous corn study conducted on a loam soil in northern IN, corn yields under strip-till were 5% greater than in no-till and within 1% of full-width tillage (Figure 1).

In many states, the USDA’s Natural Resources Conservation Service (NRCS) provides incentives through the Environmental Quality Incentives Program (EQIP) for transitioning to strip-till or no-till. For more information about financial support for transition to strip-till, visit your local USDA Service Center or the NRCS EQIP website.