Steering Toward Efficiency with Implement Guidance in Strip-Till

Farmers share the advantages — and cost justifications — for adding implement steering to their strip-till system.

MOVING TO CORRECT. West Brooklyn, Ill. farmer, Dave Delhotal, installed a Trimble TrueTracker active implement steering system on his 16-row SoilWarrior in 2013 to help manage implement draft on his hilly terrain and contours. Although the steerable hitch provides about 8 inches of movement left to right, Delhotal looks back and often finds that it makes use of almost that entire range.

West Brooklyn, Ill., farmer Dave Delhotal will be the first to say that implement steering is immensely helpful on a strip-till farm with hilly terrain and contours, but the benefits don’t stop there.

Delhotal, who strip-tills corn and no-tills soybeans with his father Ray, outfitted his 24-row John Deere planter with a Trimble TrueGuide passive implement steering system in 2012. In 2013, he added Trimble’s TrueTracker active system to his 16-row SoilWarrior from Environmental Tillage Systems.

“We have highly variable soils from blue clay to quicksand, which is one of the main reasons we went to strip-till back in 2009 — we wanted to get rid of our shed full of different tillage equipment,” says Delhotal. “The fact that we didn’t start getting really good RTK until around 2013 kept us from really going full bore into it. But once we did, we got a SoilWarrior with the steerable hitch and active implement steering right away.”

Experienced with both systems, Delhotal notes a few stark differences between passive and active implement steering that figure heavily into strip-tillage practices. (click here to see a video of Deholtal’s system in the field).

“In an active system, hydraulic cylinders or disc coulters actually control the implement, so you’ll need a second GPS receiver and steering controller for the implement along with a hydraulic valve,” he says. “You’re basically buying a whole second auto-steer set-up for your implement. Passive systems are a lower cost solution, and all you need is a second GPS receiver and a few unlocks.”

Delhotal feels that active systems offer the highest level of accuracy and effectively eliminate the symptoms of implement drift, while passive set-ups only help mitigate them.

“I can see the difference an active system is making. On a hill, if I look back I can see how far from center the hitch moves,” says Delhotal. “The SoilWarrior hitch has about 8 inches side-to-side, and I see it getting close to being maxed out quite often — that’s a significant correction.”

Having experimented with both systems on his strip-till rig, Delhotal notes that the results, specifically while building strips, are significantly better with an active system. 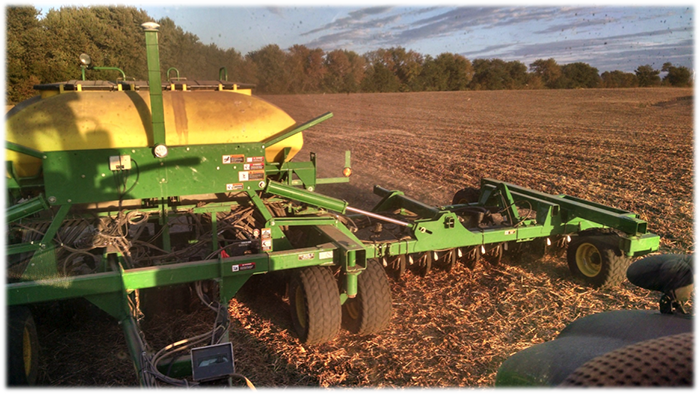 PASSIVE OPTION. Passive implement guidance systems are a great way to get your feet wet because they cost less and are easier to install, says Delhotal. They can be more suited to low draft implements like planters or seeders, rather than a strip-till bar.

“Passive systems are a great way to get your feet wet because they cost less and are easier to install,” says Delhotal. “I’ve noticed that a passive system is more suited to low draft implements like planters or seeders, rather than a strip-till bar.

“With the smaller planters, once they get into the strip, they usually don’t want to come out, unless the slope is really bad, which is why it’s probably more important to build the strips perfectly.”

It’s for these same reasons that Nerstrand, Minn., strip-tiller Nate Bonde, decided to install a TrueGuide system with two Sunco Stabilizer discs on his 12-row toolbar with Dawn Pluribus row units 3 years ago and left his planter without a system.

“We run land with curves and side hills, so we were trying to minimize the implement drift and get more consistent spacing so when we followed with the planter it would be right in the sweet spot,” says Bonde. “We didn't need to do anything with the planter though because the row units want to follow the strip anyway, so getting the strip right first with implement steering was the priority.”

Although both farmers cite the strip-till bar as the better candidate for implement guidance, Delhotal says the diminished amount of control in a passive system is a potential disadvantage in some instances on a planter. Because the tractor is steering to compensate for implement draft in a passive system, this may cause the tractor to inadvertently veer onto the strip.

“We’re actually in a controlled traffic system so we only have 2 rows affected by this,” he says. “But when you have implement drift and the tractor, instead of the implement, is steering off line to correct for that, it’ll drive on your strip — that’s something to look out for.”

“For an active system, you may be able to get the price down lower than $12,000 if you do some scrounging and cobble together your own system,” he says. “But on the high end, I am figuring in a 6-blade Orthman Tracker which is a nice system, but it’s not cheap.”

The most direct route to return on investment with the technology is through prevented yield loss on missing the strip with the planter. Cory Miller, president of MBW Products which manufacturers ProTrakker, notes that missing the nutrient zone is akin to missing the entire point of strip-till to begin with. 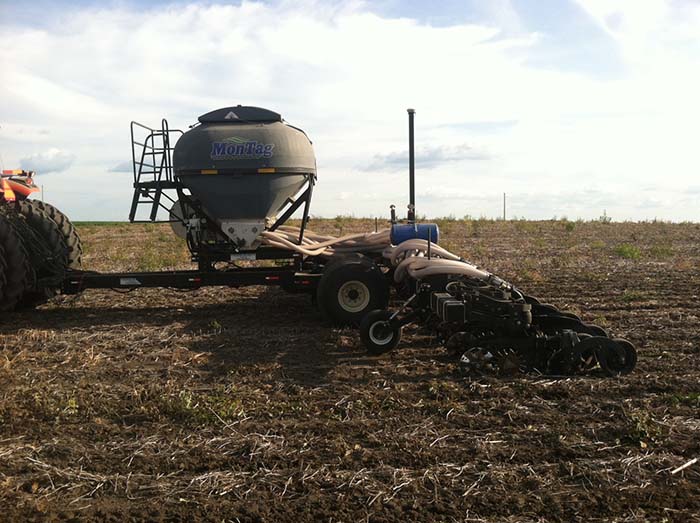 MINIMIZE DRIFT. Nerstrand, Minn., strip-tiller Nate Bonde, decided to install a TrueGuide system with two Sunco Stabilizer discs on his 12-row toolbar with Dawn Pluribus row units 3 years ago and left his planter without a system.

“When you’re banding nutrients it’s crucial to hit that same zone when you’re planting,” says Miller. “That’s where implement steering really makes strip-till work. If the zone is missed, the theory of the whole practice is basically thrown out. Sometimes corn won’t even put an ear on if it doesn’t hit the band.”

Miller echoes the sentiment that the payback isn’t only seen on farms with lots of rolling hills and slopes.

“Rougher terrain and hills do make implement steering more important, but we’ve sold a lot of systems to farmers on very flat terrain as well because the bigger the implement, the harder it is to keep on a defined path,” says Miller. “Even on flat ground you’ll see a fair amount of draft with wider planters and strip-till machines because of the drag.”

Beyond the most obvious payback of ensuring ideal strip placement, Delhotal has isolated other advantages that make his system worth its price tag.

“You can make the investment pencil out for your own operation, but it’s a lot easier if you’re doing custom work too,” says Delhotal. “Implement guidance is excellent for this because all the guess rows end up exactly the same. Every single row is going to measure 30 inches or 20 or whatever you’re on.

This is also true for matching Delhotal’s own 16-row toolbar to his 24-row planter. He points out that implement steering becomes the cheapest option by far for farmers who may be considering a whole new planter or strip-till bar to match their existing equipment as a steering system can eliminate that need.

Delhotal has also been examining the additional benefits of seeding his cover crops with implement steering.

“We’re experimenting with seeding cereal rye and annual rye in the fall using implement guidance,” says Delhotal. “We’ll come back and build strips in between those rows of ryegrass and plant into the strip so we don’t destroy any of the cover crop.

“Last spring was the first year I tried it, but there’s not much wiggle room when I’m trying to squeeze a 12-inch strip in between what happened to be a 15-inch row of ryegrass. It actually worked incredibly well because of the accuracy and lack of drift. We’re going to be doing more of that in the future.”