Mike Petersen dug his first soil pit 34 years ago. More than 1,500 digs later, he has determined that strip-till and accurate nutrient applications can achieve 300-bushel corn more efficiently and affordably than conventional tillage.

Petersen, the lead agronomist at ANP, Inc., based in Moline, Ill., shared his experience-based knowledge on the corn plant root system’s relationship to the strip-till method at the 2nd annual National Strip-Tillage Conference.

Back to the Roots

Petersen feels that most of the answers to questions farmers might have about corn and their strip-tilling efforts, lie right beneath the surface in the crop’s root structure. This is why, like many agronomists, he’s a big proponent of digging.

“Digging a quality pit is an 8½ hour job,” says Petersen. “But it offers the opportunity to tell a lot about the corn’s roots. I’ve looked at the total number of root inches under the plant and we’ve counted them.

“In an ideal situation, a mature plant will create 38,000 linear inches of root. If it gets around there, you’re looking at a 12 foot tall plant. That’ll be a good yielding crop.”

Part of developing a solid strip-till system is understanding how roots grow at a few pivotal stages. In his research, Petersen has examined soil profiles once per week from late April to early September — monitoring things like temperature, nutrient absorption and water uptake. These tests have guided his understanding of fertilizer placement and timing.

If someone were to hand you a soil test report, would you be able to read the information and understand what it means? Unlock the hidden secrets of accurately deciphering your soil reports. Included in this FREE, 14-page special edition eGuide, readers will have the exciting opportunity to go step-by-step through fluently interpreting a soil test to make accurate decisions on your cropping operation. Download now »

“With early root systems, around V1, you’ll see that a seedling root without any starter fertilizer is probably going to get about 4-6 inches long,” says Petersen. “But with starter fertilizer placed directly in the seed trench, you’ll see it jump up to 6-12 inches. Having top quality nutrients, micronutrients and even biologicals in your starter package make a tremendous impact.”

Petersen also earmarks 15 days after emergence as an important time in the life of the corn crop. It’s at this point that the root structure starts feeding itself on the nutrients that have been made available in the strip — which is why depth is important.

“You won’t have a very big system of roots yet, but if you’ve placed nutrition along with the seed at a certain depth, usually between 4 and 6 inches with phosphorus (P) and potassium (K), you have a chance for that seedling root to get into that and feed itself,” says Petersen. “Roots actually don’t seek nutrients; they thrive in the presence of them.”

Petersen is among the rank of strip-till advocates that feel strongly about placing fertilizer in the strip with the strip-till rig, saying that farmers running a rig naked are doing themselves a disservice.

“With strip-till, we can place nutrients in the zone, and there’s no reason not to, unless you have very sandy soils that will lose them out of the bottom,” he says. “Roots don’t grow upward, unless they’re from a mango tree. We’re also headed for the Environmental Protection Agency (EPA) regulating nitrogen (N) application, and placing it in the strip is more efficient.” 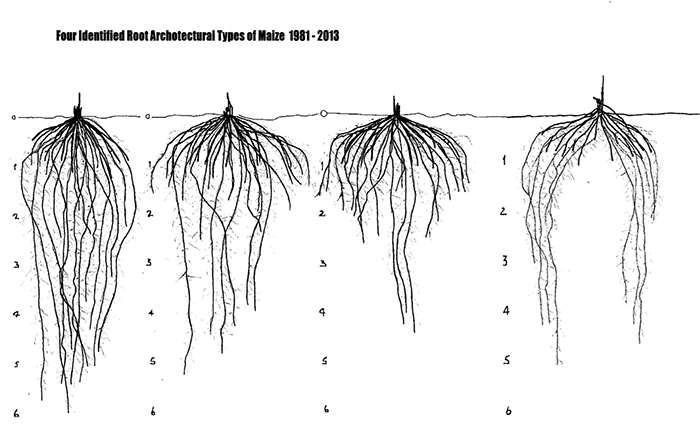 GROWTH SPURT. Veteran agronomist Mike Petersen has identified four main types of root architecture across hybrids in his digs. He says a long, deep carrot-type of root system (far left) works especially well with strip-till because the roots are clustered in the zone that has been worked.

At 40 days after emergence, he says that the root system usually extends down to about 2½  feet. His examination of roots around this time has taught him that a Y-Drop set-up for a sprayer is a more efficient nitrogen delivery system than sidedressing.

“With Y-Drops, we put nitrogen down right alongside the plant where it feeds the corn quickly so we can time our application better,” says Petersen. “I did a test using a coulter and we put it in the middle of the row on 30 inch centers, 7 inches away from the plant. After checking, we saw that it resulted in 16 bushels per acre less than when it was up against the plant because we had uptake within four days compared to having to wait a week or two before the plant started taking advantage of what we put in with the coulter.”

He notes that when N is applied to the middle of the rows not only does it take longer to migrate to the corn’s roots, but in a strip-till system, microorganisms in the residue layer will also steal some of the N on its way down.

Another method of examining roots is employing capacitance probes. Petersen says they can be used to get a read on how much water corn roots are taking in and at what depth it’s happening.

“Capacitance probes can be a little costly, but they’ll give you a good idea where your roots are taking in nutrients and water because they look at what ions are moving across the soil profile,” he says. “Minirhizotron tubes can also be used, but they’re likely to give you a false impression. When you put the tube in the ground, the roots will tend to swarm around it because of the disturbed soil.”

However, he still feels that nothing beats good old fashioned digging.

Lately, root structures across different corn hybrids have been drawing Petersen’s attention. He feels as though some varieties may be especially well suited to cooperate within a strip-till system while others may be less ideal. He’s identified four main types of root architecture across hybrids in his digs.

“I think a long, deep carrot-type of root system works especially well with strip-till because the roots are clustered in the zone that has been worked,” says Petersen. “There are some newer hybrids that have a root system that look almost like a Fu Manchu mustache. That wouldn’t work very well at all because the roots would be pushing outside of the strip.”

He says that strip-tilling offers farmers the opportunity to build a large root system, but not knowing how the roots are genetically predisposed to grow may sabotage that benefit to some degree.

“Talk to your seed dealers and ask them about your hybrid’s root system,” Petersen says. “Tell them you’d like to know, because some companies haven’t spent that much time looking into these things yet. If they don’t know, tell them to get their backhoe out and dig in their plots. With that knowledge, you can make better management decisions.”